"Hannabach Strings unleash the ultimate sonic and tonal potential possibilities of the two very different guitars I regularly perform on in recital—a Gary Southwell A-Series, Contemporary Classical guitar, and an 1861 Scherzer 10-string, Viennese 19th-Century "Romantic" guitar. Singing, crystalline trebles, powerful, robust basses, polyphonic clarity, and sonic "integrity" from the lowest to highest registers are the mere "starting points" for a rich, wide, and varied "timbrel palette" unmatched by any other string. I recommend Hannabach Strings without reservation as the "Best Available" bar none!"

Classical Guitarist Stanley Alexandrowicz is becoming internationally renowned for his virtuosic musicality, insightful interpretations, and refined guitarism. In addition to his command of the instrument’s standard repertoire, he has premiered and commissioned over 100 works by composers from Europe, Asia, North America, Cuba, and South America. He is truly an “artist-of-our-time.”

An ALBANY RECORDS recording artist, Stanley Alexandrowicz’s recording of Dominick Argento’s Postcard from Morocco with the Curtis Opera has recently been released (ALBANY TR1098-99). Forthcoming is a new CD of 20th and 21st Century American guitar works (Ernst Bacon, Brian Fennelly, Kendall Kennison, Eric Sessler, Edward Green, and Carlton Wilkinson). He has been honored with the Ernst Bacon Society’s recording grant to commit to CD the premiere performances of the composer’s works for guitar. (He is also editing these works for publication).

A scholar and specialist in the field of 19th Century music, he often features the virtuoso Romantic guitar repertoire in his concert programs – both in conjunction with the “music of our time” and, in recitals devoted to the Romantic Art. In addition to his work as an international soloist, he collaborates regularly in Chamber Music performances with some of the world's leading musicians. Of special note, is his "Voice and Guitar Duo" with world-renowned soprano Dominika Zamara—bringing together the worlds of Opera, Lieder, Song, and Contemporary Music, in realizations of unmatched sonic beauty and rarified musical intelligence.

Performances highlights during recent concert seasons include New York, Philadelphia, Boston, Baltimore, and Princeton, and include the U.S. premiere of Vaclav Kucera’s “Concierto Imaginativo-Homenaje a Salvador Dali” for guitar and string orchestra (Baltimore), and his “Diario-Omaggio a Che Guevara” (NYC), in honor of the composer’s 80th birthday year. 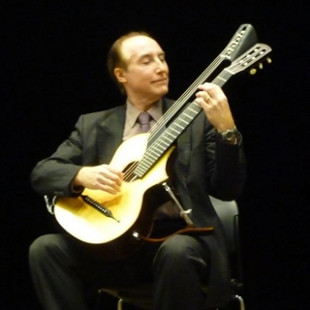